On October 24, 1929, the United States stock market crashed ushering in a decade of darkness and turmoil.  As global economies tumbled, want proliferated—want of employment, want of security, want of escape.  The desires born from want drove an explosion of cultural creativity from film to fashion.   Some sought to satiate the needs of the public, others sought to distract them from the troubling times, yet others hoped that by stoking desire and encouraging consumption the economy could be redeemed.

Some of the most innovative shoe designs in the history of Western fashion were created during this decade of want.  Shoe designers Salvatore Ferragamo, Andre Pérugia, Steven Arpad and Roger Vivier played with the architecture of footwear creating uplifting platforms and wedges as well as futuristic novelty heels and revealing peep toes that reflected escapist Hollywood glamour as well as new conceptions of fashionable femininity.

The press release and media kit for this exhibition can be found in our Media Room.

The Bata Shoe Museum is excited to partner with the Kimpton Saint George hotel. Located ideally across the street, click on the logo below to learn about the hotel and a special promotional package! 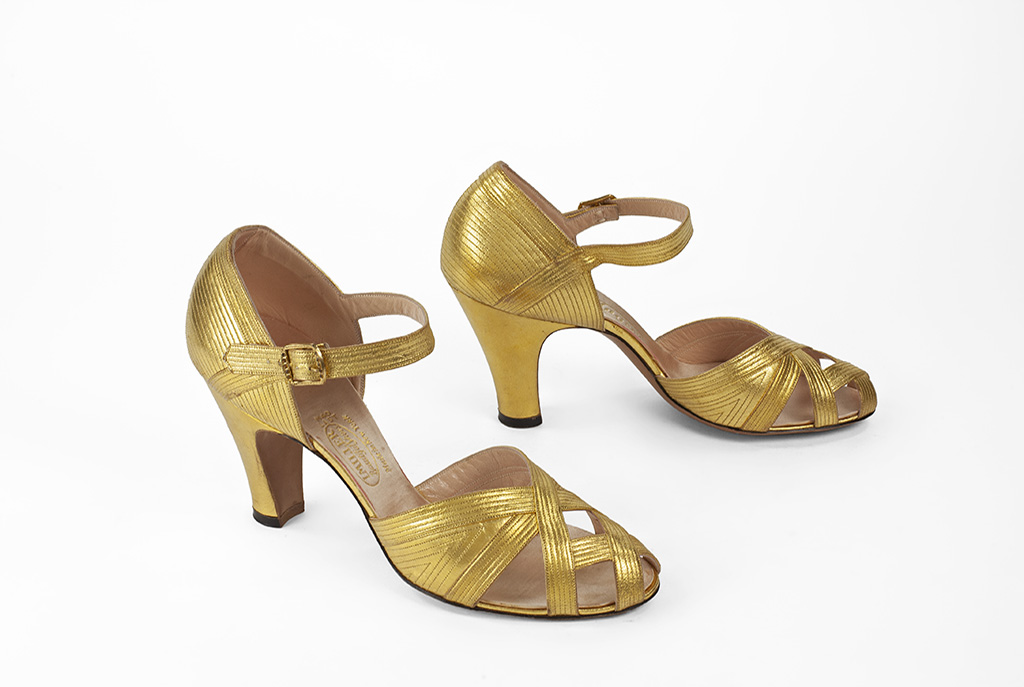 In the early 1930s, the popularity of gilded leather evening shoes soared. This might seem counterintuitive given the dour economic outlook of the age but gold and silver footwear proved to be a frugal choice. Many advice columns from the early years of the Depression suggested that the only evening shoes any woman needed was a single pair of gold or silver shoes because metallic footwear could be worn with ensembles of any colour. 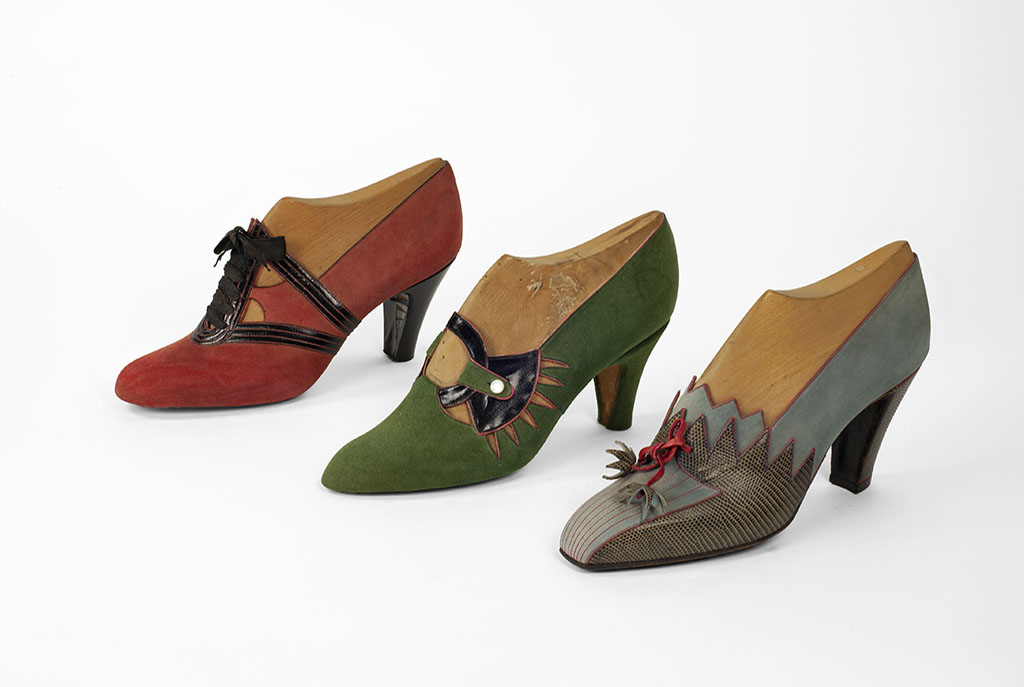 Colourful shoes were embraced by consumers interested in being thrifty as well as fashionable. New footwear, while an expenditure, was one way of updating an outfit that had to be worn repeatedly such as a suit. This trio of prototypes was made by the famous French brand Herault for their slightly lower-cost line Preciosa. In addition to being colourful, each model has interesting detailing. It is not known if these prototypes made it into production but they certainly were in keeping with the fashions of the moment. 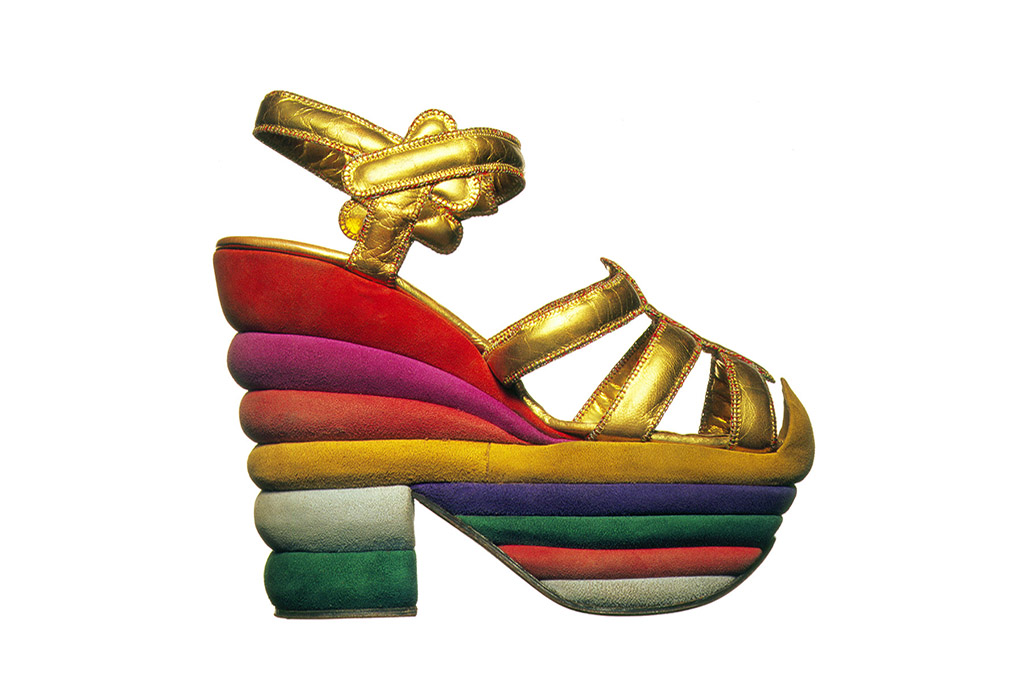 In the 1930s, Hollywood films offered weary audiences an inexpensive escape from the pressures of the real world. Salvatore Ferragamo ﬁrst rose to fame making footwear for Hollywood ﬁlms and subsequently, Hollywood celebrities. One of the most famous shoes of the 1930s was Ferragamo’s iconic Rainbow Platform, designed for Judy Garland in 1938. From its Streamline Moderne architecture to its exuberant colour in velvety suede, the Rainbow Platform was the perfect shoe for the rising star whose most famous ﬁlm, the Wizard of Oz, featured her singing “Over the Rainbow”. 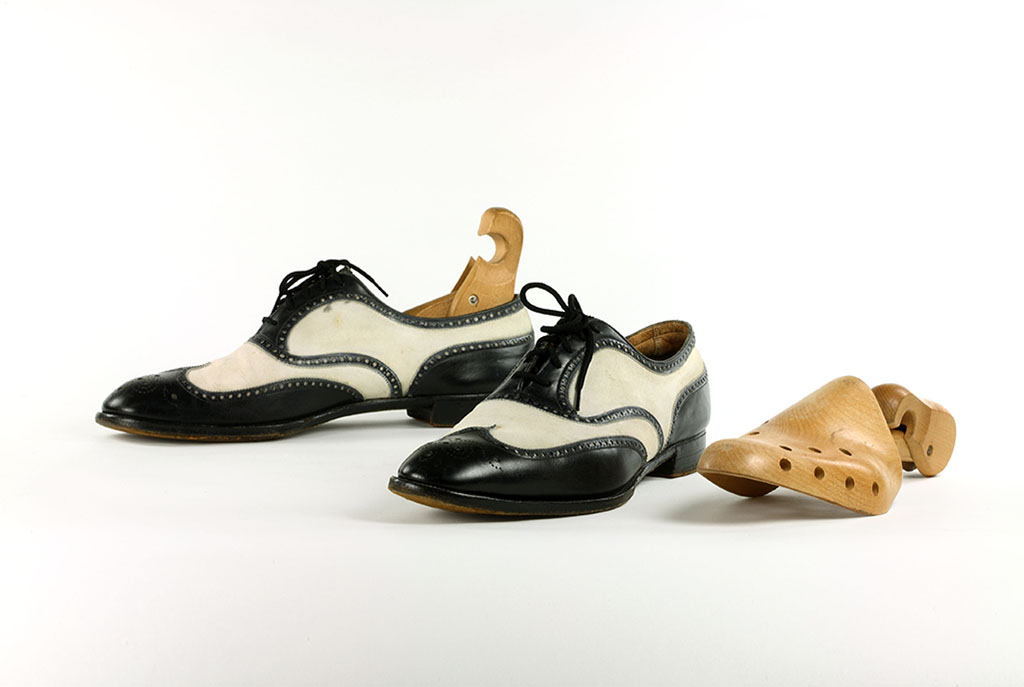 The New Leisure also called for men to have casual footwear and the most popular leisure model in the 1930s was the two-toned spectator. The style had been around since the nineteenth century and connoted leisure and play. Worn outside of the context of leisure, spectators were seen as a bit flashy and suggested a ‘player’ of a different sort. This particular pair was worn by the famed Hollywood actor Bela Lugosi who ﬁt the model of a ‘player’ perfectly. Lugosi was married ﬁve times. 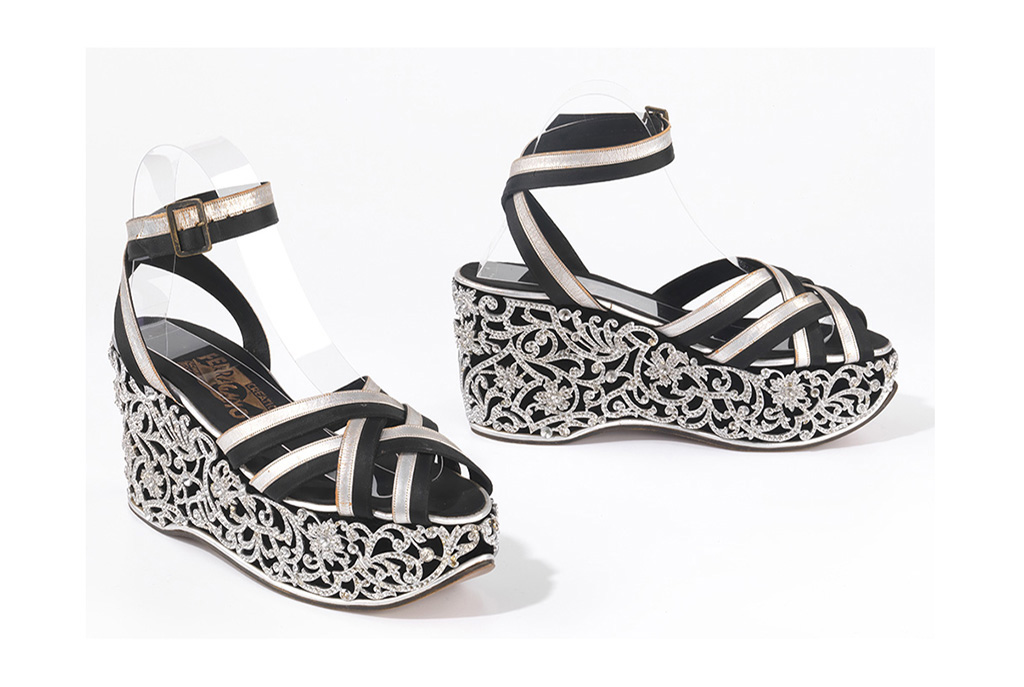 In 1938, platforms took the fashion world by storm. Although elevating footwear had been worn at beaches since the late 1920s, it wasn’t the end of the 1930s that platforms became the footwear of choice for day and night. Ferragamo lavished these platform sandals with highly ornate silver ﬁligree. In the 16th century, the last time platforms were fashionable, upper-class Spanish women’s chopines were frequently decorated with precious metals and gems. This platform, likewise, was only for the wealthy as they were priced at $100 USD in 1938. 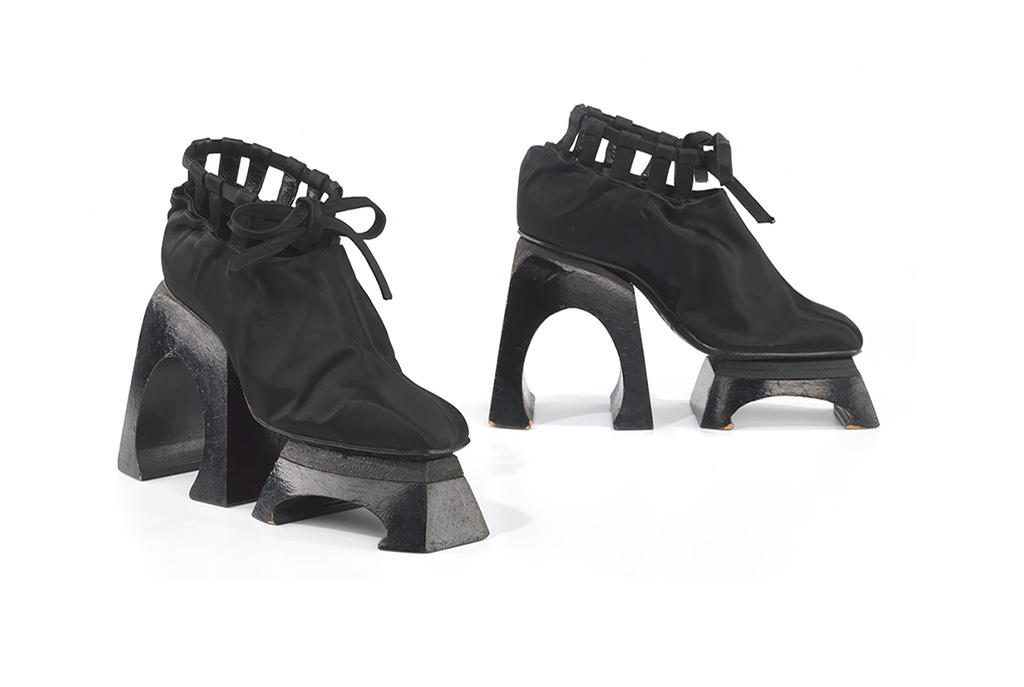 Throughout the 1930s many expressed hope for a better future which they believed would be achieved through science and technology. This utopian ‘World of Tomorrow’ was the theme of the 1939 New York World’s Fair and in honour of this, Vogue asked nine men from a range of fields unrelated to fashion to predict what people would be wearing in the year 2000, including shoes with startling architecture. These remarkable shoes were designed by Steven Arpad for Balenciaga. At ﬁrst glance, they seem entirely futuristic, but they are in fact grounded in the past. The arched stilts are reminiscent of both ancient Roman viaducts and stilted bathhouse clogs called qabâqib worn for centuries in the Ottoman Empire. 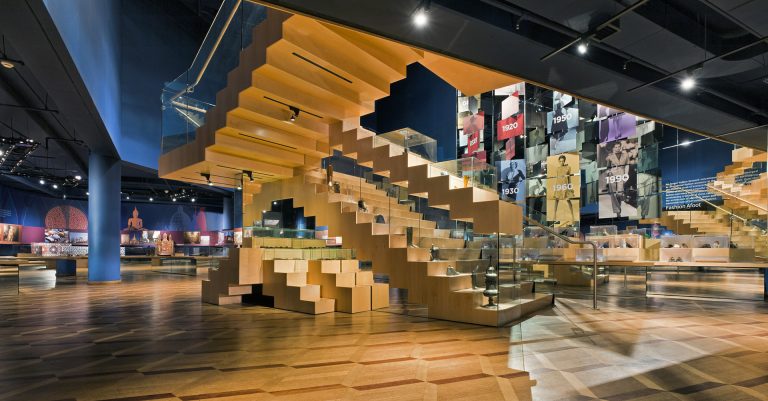 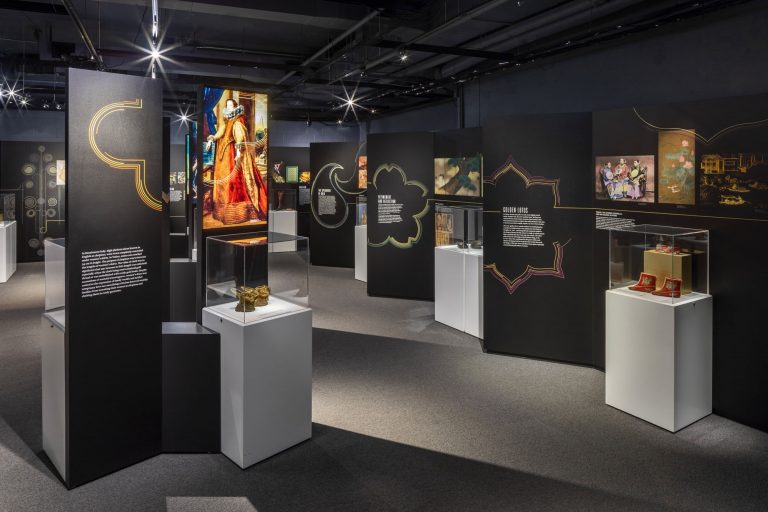 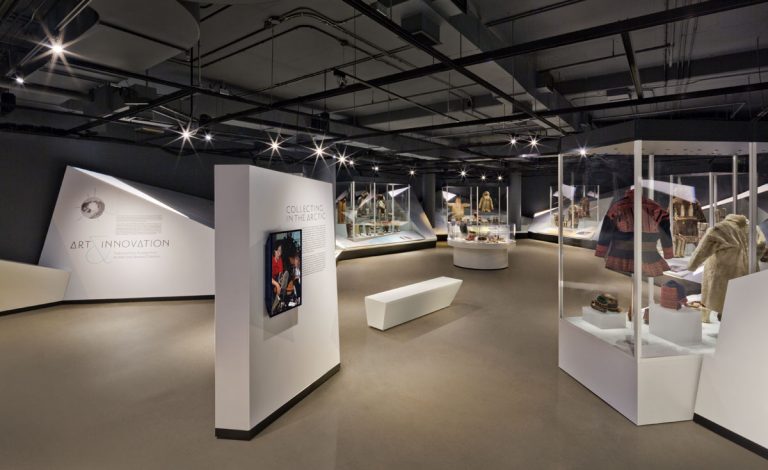