A world renowned collection of over 14,000 artifacts

The mission of the Bata Shoe Museum is to communicate the central role of footwear in the shaping the social and cultural life of humanity. Through acquiring, conserving, researching, interpreting and exhibiting material evidence of the history of footwear and shoemaking, the museum illustrates the changing habits, lifestyles, culture and customs of the world’s inhabitants. The BSM’s international collection of over 14,000 artifacts spans 4,500 years of history.

The Bata Shoe Museum is home to the world’s largest and most comprehensive collection of shoes and footwear-related objects. In addition, it is an internationally recognized centre for footwear research that sponsors field research, publishes research findings and promotes education.

At present, the permanent collection contains artifacts from virtually every culture in the world. Where else could you find French chestnut-crushing boots under the same roof as delicately-embroidered Chinese silk shoes, bear fur shoes made for Japanese samurai warriors and footwear made from human hair?

A rare and well-preserved velvet-covered platform chopine from 16th-century Italy is one of the great treasures of the museum’s fashion footwear collection, which ranges chronologically from the Italian Renaissance to the catwalks of today’s designers. This chopine – so tall that the wearer could not walk unaided – provides an interesting introduction to other equally outrageous shoe styles introduced over the centuries. Salvatore Ferragamo and Vivienne Westwood weren’t the first designers to think of platforms; nor, if history teaches us anything, will they be the last.

One of the most important aspects of the BSM’s holdings is an extensive collection of Indigenous North American and circumpolar footwear. This collection, along with the fieldwork commissioned to study indigenous shoemaking, have greatly contributed to the scholarship of shoes.

But the BSM’s collection doesn’t stop at shoes. We also have a companion collection of shoe-shaped ornamental artefacts such as majolica hand-warmers and inlaid fruitwood snuffboxes, as well as graphic material from 14th-century woodcut prints and 19th-century caricature lithographs to original paintings and sculptures.

Some highlights from the BSM collection:

The debut of the chopine occurred during the Renaissance and is closely associated with Venice and Spain. Chopines were inspired by footwear of the Near East where Venice had holdings and a thriving trade, but was still the footwear of choice for many wealthy women at the beginning of the 17th century. Highly impractical, the chopine's primary purpose was to make the wearer stand out and therefore was perfectly suited for extravagant and expensive embellishment 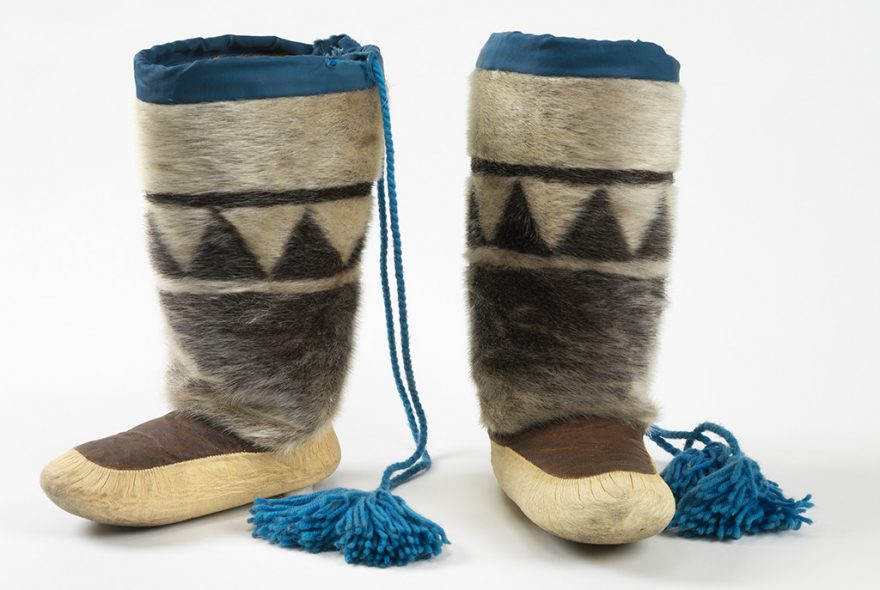 Seal skin boots made in the southern part of the Caribou Inuit region feature narrow leg sections and simple geometric designs. Hair direction and designs flow horizontally on women's boots and vertically on men's. These women's haired seal skin kamiks with triangle inlay design were made by Judith Akpaliak. 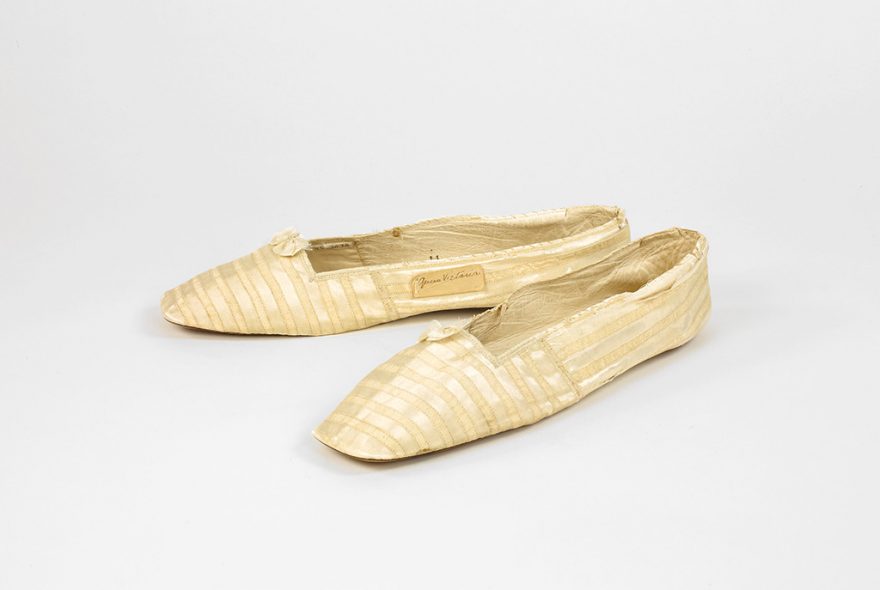 These shoes, worn by Queen Victoria, are virtually identical to the pair she wore to her wedding. They also date to 1840, the year of her wedding. This pair, like her wedding shoes, is embellished with ribbon applique and has very delicate elastic across the instep. 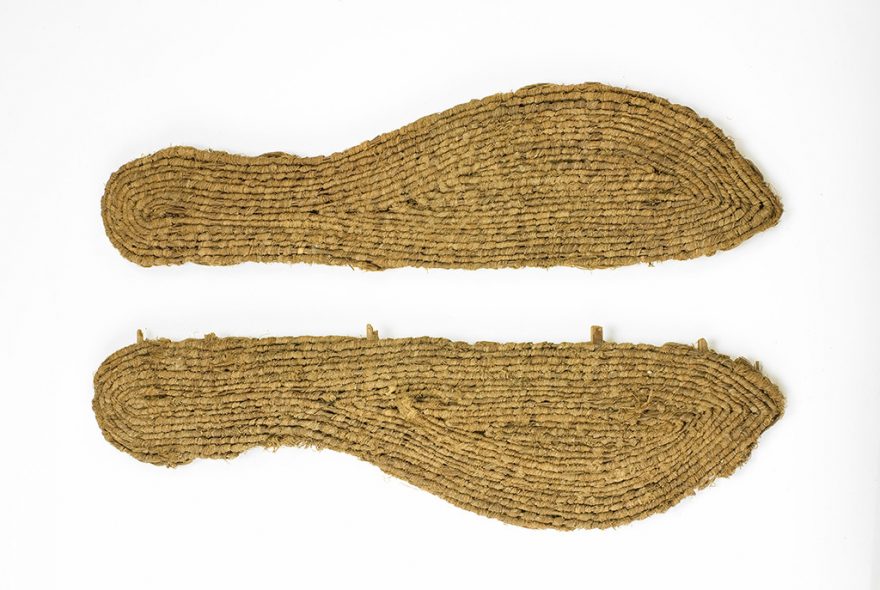 The design of this pair of sandals is simple yet practical. Indeed, the contemporary flip-flop is a clear descendant of this type of ancient sandal. This pair is missing the original thong that would have secured the soles to the foot. 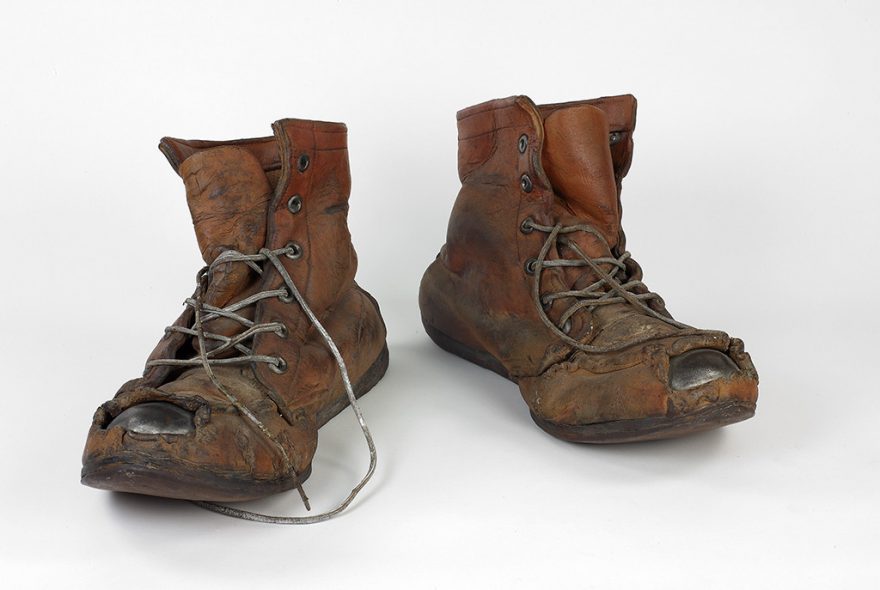 Acclaimed Canadian ceramic artist, Marilyn Levine, crafted these steel-toed worked boots out of clay. Her remarkable ability to craft three dimensional works of trompe l'oeil in clay has garnered her international acclaim. The contrast between the reality of the hard fired ceramic and the image it projects as a comfortable well worn pair of leather boots is intriguing. 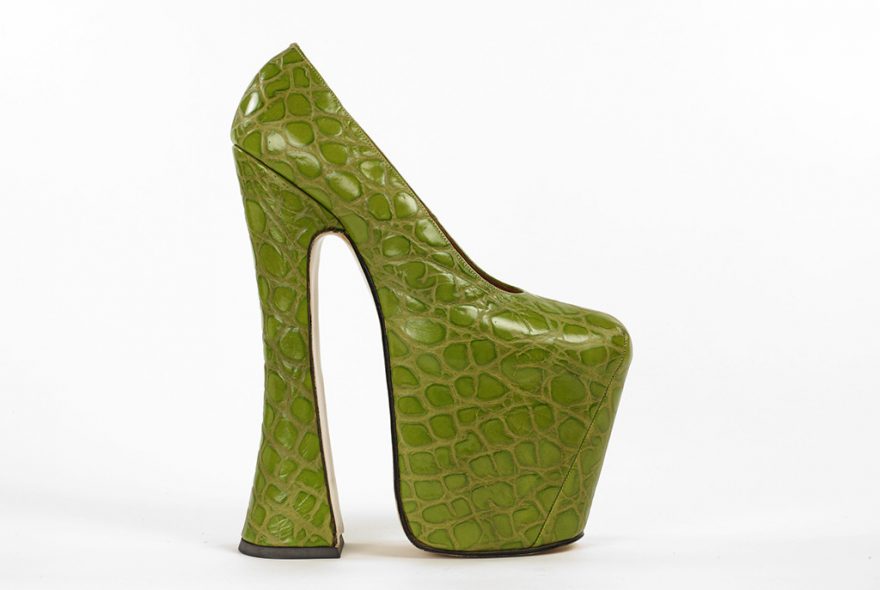 Fashion designer Vivienne Westwood began to design shoes because she couldn't find anything flamboyant to complement her daring theatrical ensembles. Many of her shoes feature exceptionally high heels such as these 'moc croc' platform shoes with 22cm high heels.